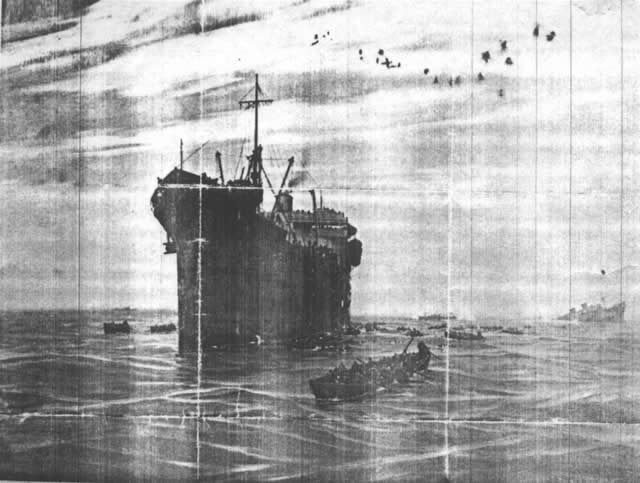 On the 23rd of October the Regiment boarded the “Monterey” at Liverpool, and by the 4th of November was passing Gibraltar. The pleasant passage which had until this tine made life a round of thicken was somewhat disturbed by an incident which occured on the evening of the 6th of November At about a quarter after six, Just after twilight, German aircraft attacked the convoy and torpedoed both a Dutch ammunition ship and the “Santa", a Grace Line ship, carrying 14th General Hospital, and a reinforcement battalion. The Dutch ship was immediately destroyed, but the "Elena" managed to stay barely afloat. The “Monterey”, under captain Johannsen, noved as close as possible to the stricken ship, and lowered boats to pick up survivors. Men of the Irish who had manned Bren Gun posts on the decks during the battle with the Aircraft were follcMed now by other rren who assisted in rowing the lifeboats All the troops of the Eleventh Bde., who were on the ship, worked ceaselessly assisting the survivors on board, lending them dry clothes, and finding thefli something to drink and a place to sleep. As the present writer was one of the unfortunates he can well assert that the reception accorded to the almost 1300 survivors w s most admirable

On the 7th the ship anchored for a day in Philiçpeville Harbour, but attempts to transfer the survivors to another ship were prevented by a heavy sea. That night the "Santa Elena" was towed i to the harbour, but sank a few hundred yards fran safety, a]iitst exactly 24 hours after having been torpedoed.”